From high-end product authentication and anti-tampering to convenient new forms of retail, Toppan’s IoT-enabled security technologies are becoming part of our everyday lives.

In August 2014, a prominent Indonesian wine dealer based in California was sentenced to 10 years in prison and made to pay a fine of $20 million to the government and $28 million in restitution to his victims. His crime? Manufacturing counterfeit wine in the basement of his home and selling it to his customers as special vintages. The sums paid in fines show just how lucrative counterfeiting high-end wine can be.

The problem is not confined to the United States. China, which has been the leading export market for French Bordeaux since 2011 and a top-ten destination for Burgundy since 2018, has a thriving black market in empty bottles of high-end vintages. Waiters sell these to counterfeiters who sell them as new after refilling them, reinserting a cork and replacing the capsule (the protective sleeve around the neck of the bottle).

Of course, the presence of counterfeits on the market is lethal to the reputation and pricing-power of fine wines. That is why Toppan teamed up with Belgian object-identity specialist Selinko to develop two sophisticated solutions in the form of CorkTag™ (2017) and Cachet-Tag™ (2018). CorkTag is a tag that runs from the top of the neck above the cork and down one side of the capsule. It contains an IC chip and antenna circuit that simultaneously authenticates the product and protects it from tampering. Piercing the capsule with a corkscrew or slicing it with a knife breaks the circuit and sends an alert to a companion smartphone app using near-field communication (NFC technology). Cachet-Tag, meanwhile, is an NFC tag integrated into the label and processed to be brittle so that the antenna breaks when the label is removed, making reading impossible and showing that tampering has taken place.

Both technologies also enhance consumer engagement. Just scan the tag with an NFC-enabled smartphone and a companion app will provide you with information on everything from region and vintage to nose, palate and the best serving temperature. “The technology goes beyond product authentication and can be used for traceability and consumer engagement too,” says Takuya Onuki, overseas business development manager for Toppan.

prices are high, the actual numbers of bottles produced and sold are small. For this technology to really take off at scale, it needs to be applied to more mass-market products. “Spirits is one obvious and promising area,” says Onuki. “But there are other needs too. Think of cosmetics or powdered milk, where using counterfeit products can have lethal consequences.”

Toppan is already offering NFC and RFID (Radio-Frequency Identification) technology in other formats in more mass-market areas. For example, the company makes and prints labels with RFID tags inside for one of the Japan’s largest casual apparel companies. RFID labels are far more convenient than traditional barcodes because they do not require a person to place them in the right position in order to be read by a scanner. With them, both inventory checking and check-out can be fully automated—something that store brands are increasingly keen on as they increase the number of self-checkout and, eventually, checkout-free stores.

It is QR codes and RFID that represent the biggest market of all. Once a thing has been assigned its own unique ID using either of these technologies then all sorts of linked services can be offered via Internet. The media that carry those unique IDs are labels and product packaging—both areas where Toppan has proven know-how and technologies. “Attaching a QR code to a product costs as little as one cent,” says Onuki. “If the IoT involves hundreds of millions of objects, this is more like the IoE: Not the ‘Internet of things’ but the ‘Internet of everything.’ You’re talking a scale of trillions rather than hundreds of millions!”

At the moment, IoT Track & Trace is the smallest of the three businesses that make up Toppan’s Security Solutions after Government ID and Secure Payments, but the business is growing at a brisk 16 per cent per year, powered by the rapid growth of the IoT is a powerful tailwind. As the number of connected objects keep growing, this part of Toppan’s business is on an unstoppable upward trajectory. 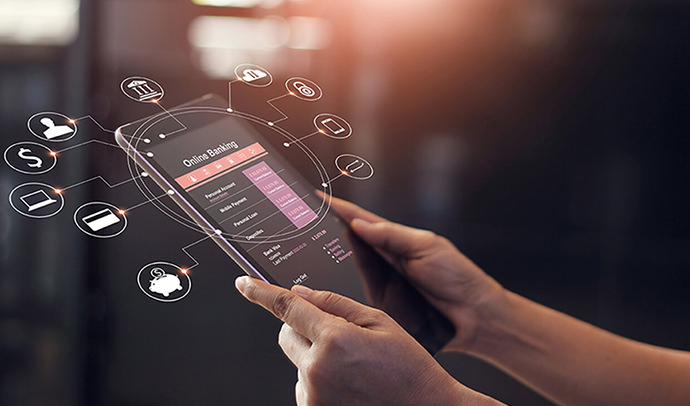 Trust is the basis of society