Toppan has over half a century’s experience making interior décor materials. Now it’s layering digital technologies on top of manufacturing know-how to create smart houses, while branching out into commercial buildings as well.

When King Ludwig II of Bavaria built himself a replica of the palace of Versailles on an island in a southern German lake in the 1880s, it famously featured a dining room table that could be winched up and down through the floor. In the 1990s, Microsoft founder Bill Gates built himself a boundary-pushing “intelligent house” in Seattle where sensors controlled the lighting and got music and movies to follow visitors around as they moved from room to room.

Now, because of recent advances in digital technology, you no longer have to be a king or software billionaire to live in a smart home of this kind. One difference: Many current developments in smart living are less about simple self-indulgence and more about helping people to stay safe and healthy as they live ever longer lives.

In late 2018, Toppan launched three devices specifically targeting this older demographic in the Japanese market. The first uses underfloor sensors to track people’s movements in the bathroom. “The system is designed for older people living alone. Many accidents occur in bathrooms, but you obviously don’t want cameras in there. The sensor-equipped floor solves this problem by sending out an alert via the cloud if someone goes to the bathroom and doesn’t emerge after a certain time,” explains Shinichi Kadota, general manager of Toppan’s Environmental Design Subdivision.

Sensors are not the only thing under the floor in Toppan’s bathroom of the future. While we’re all quite good about regularly brushing our teeth and washing our faces, we may not be quite so good about keeping tabs on our weight. Nonetheless, it’s a prudent thing to do since sudden weight change can presage health problems. Toppan’s stealthy scales solve this problem neatly: built into the floor in front of the wash basin, they measure your weight without your even noticing.

The third product, a wall that displays information, is necessarily less stealthy because visibility is its whole raison d'être. An LED screen that sits within the wall beams text and graphics through the wallpaper from the inside. Content can include anything from weather forecasts to short, practical messages from other family members.

“Our interior décor materials business was already bringing us into close contact with people’s everyday lives. Now by incorporating expertise from domains like Security Solutions and Electronics, we can help to raise quality of life,” Kadota says. The strategy is to leverage the deep resources and expertise of the interior décor materials business to develop innovative products and services to take the company into entirely new business fields well beyond decoration.

Manufacturing plus design plus consultation

This new foray is just the latest chapter in the evolution of Toppan’s interior décor materials business. Having started out making printed décor paper for furniture-makers in the 1960s, the company expanded into producing paper and films for industrial housebuilders in the 1970s and 1980s as Japan underwent a housing boom.

All the developers of prefabricated houses employ interior coordinators whose job is to create color systems for inside the house. Toppan established an interior design department in the 1970s to provide them with attractive and authentic-looking design options. The designers create wood grain designs by buying pieces of timber, slicing them open, photographing the exposed grain with a process camera, then actually improving on nature, by deleting unsightly knots, magnifying the grain, or rotating the grain to offer a lateral option. (Sideways wood grain, for example, is a better esthetic choice for sliding doors in wheelchair-friendly houses.)

Toppan also helps its customers by staying on top of international design trends. Since the late 1980s, the company has made a point of sending its designers to the Milan Furniture Fair every year to spot incipient trends and bring the word back to Japan. Thanks to close relationships with local developers, Toppan also has a multi-year treasure-trove of data on the colors and textures Japanese homeowners choose for their walls, doors, floors and furniture. (The one trend that never changes over time? People in apartments above $700,000 prefer the dark vintage wood look!)

Rather than hoard this data, Toppan actively shares it with the industry. The showroom at its Akihabara includes a lecture theater where up to one hundred designers, planners and interior coordinators can get briefed on all the latest local and international trends.

Design would mean nothing unless it rested on a bedrock of manufacturing excellence. Toppan has a record of coming up with the right product at the right time. For example, the film business took a major step forward in the 1990s when the company launched its polypropylene-based Eco-Sheet brand just as PVC-based films, which omit toxic dioxins when burnt, fell out of favor. Not only does polypropylene-based Eco-Sheet not produce toxic emissions, it is weather resistant, meaning it to be used for exterior features like door and gates.

Recently, Toppan has adopted the open innovation model to keep its innovation engine humming. A 2014 tie-up with the Tokyo University of Science in 2014 explored technologies that control materials at the nanometer level to produce harder surfaces. SmartNANO décor sheets, the resulting product that came out in 2016, have been a big hit, especially in hotels. “As Japan becomes an increasingly popular tourist destination, hotels need tougher film to protect the floorboards in Western-style rooms where people keep their shoes on and roll their suitcases around,” Kadota explains.

Inbound tourism may be rising fast, but since peaking in 2010, Japan’s own population has entered a downward trend. This—coupled with the long recession that followed the end of the 1980s bubble economy—has made Japanese consumers more cautious overall. With a substantial stock of existing homes, not everyone needs to purchase a new-build anymore, while renovating old homes is both fashionable and economical.

Toppan’s response to declining housing starts has been to diversify. Homes remains the biggest segment, but Non-Homes (basically commercial buildings including shops, offices, hotels and stations) a segment Toppan entered in the early 2000s, is growing very fast. Customers include very well-known fast-food and hotel chains.

Japan’s demographic change is affecting the people who build houses as much as the people who live in them. It is estimated that, as their numbers decline, Japanese builders will have to be 50 per cent more productive by 2030 just to keep up. For them, Toppan is developing simplified building and décor materials, like plastic sheeting to cover existing bathroom tiles and easy-to-assemble storage units, to help streamline the construction and renovation process.

Toppan may not yet be making vanishing dining tables for monarchs, but it is fulfilling its mission of creating broad-based social value by responding to changes in society’s needs and helping to create the living environments of the future. 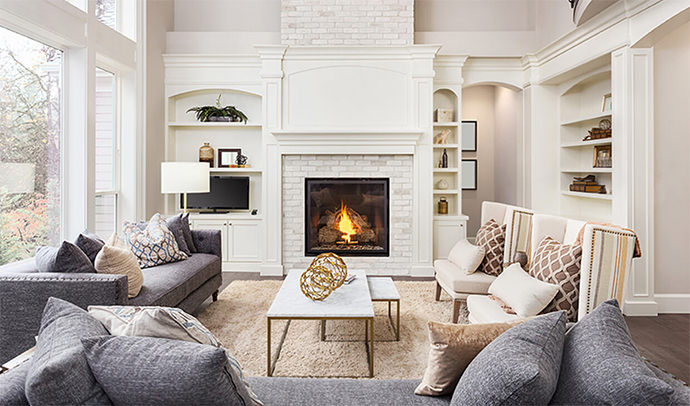 Comfortable spaces to live and work