As a printing company, Toppan has long helped transmit culture from one generation to the next. Now virtual reality can do something similar with physical spaces, reproducing and archiving them with extraordinary precision.

In gaming circles, 2016 is known as the year zero of virtual reality (VR). That’s because a whole series of VR headsets burst onto the market all at once: the Oculus Rift in March, the HTC Vive in June and the Sony Morpheus in October.

By that time, however, Toppan had already been working on VR for two decades. The company first launched its VR research and development drive in 1997. In Toppan’s case, the context was cultural, rather than gaming-related. The company had already built relationships with Japanese shrines and temples and museums around the world by providing innovative ways of displaying and exploring cultural content, such as digital displays and interactive touch panels. The move into VR was a natural progression, especially since Toppan could leverage its existing printing technologies like color management, color display and high-definition image-handling.

For its first foray into VR, Toppan used images from an outside source. The Japanese TV channel NTV had won the exclusive rights to document the restoration of the interior of the Sistine Chapel in the Vatican, a project which began in 1981. In the course of making a 3-part documentary about restoring Michelangelo’s celebrated frescoes, including The Creation of Adam, to their original colorful brilliance, NTV had taken many large and highly precise photographs of the chapel interior.

Using these pictures, Toppan spent a year recreating the Sistine Chapel interior as a VR-space navigable in real-time. Encouraged by the success of this project, in 1999 Toppan teamed up with TBS, another Japanese broadcaster, to produce VR of Nara’s Toshodaiji Temple for an upcoming exhibition on the temple’s history at Tokyo Metropolitan Art Museum. (In Japan, newspaper and television companies play a key role in the organization and sponsorship of art exhibitions).

“You can’t very well transport an entire temple or physical space to a museum. The logical thing to do is display smaller objects, while using VR to give people the experience of being in the actual place,” says Shuji Ueyama, GM of the Cultural Projects Division. This went on to become something of a pattern, with Toppan producing VR for exhibitions about places like the Nasca Lines in 2006 and Inca citadel Machu Picchu in 2012, both for the National Museum of Nature and Science, Tokyo.

The VR project took a step onto the international stage in 2000, when Toppan joined forces with the Palace Museum in Beijing to set up the Institute for the Digitization of the Palace Museum Heritage. Its mission is to recreate in VR the entire Forbidden City at the height of the Qing Dynasty. So far the institute has produced a seven-part series introducing different buildings from the 72-hectare complex.

A permanent home and a tourist boom

With VR having proved its worth both domestically and internationally, the time felt right to secure a permanent base in Japan. The Tokyo National Museum (TNM), home to the world’s largest collection of Japanese art, expressed an interest in hosting a VR theater. A temporary facility opened in 2007 for market research purposes. This was followed by a dedicated VR theater, the TNM & Toppan Museum Theater, in 2013. Around four titles are shown here annually, with special programming for children in the summer vacation. (Bug-eyed clay figurines from Neolithic Japan are a particular favorite with kids, while Japanese castles are popular with all age groups.)

Between 2011 and 2017, the number of tourists visiting Japan more than quadrupled from just over 6 million to just under 29 million. With the Tokyo Olympics coming in 2020 and Japan finally waking up to the merits of having a globalized service economy, money is pouring into the tourist sector. National and local government is doing its part by supporting the creation of multilingual guidebooks, panels and websites for tourist sites, including museums.

This tourism boom represents an obvious opportunity for Toppan. “Our strategy is to approach local governments and present VR as one tool for their overall tourism tool kit. There’s a natural link between culture and tourism. Presenting cultural assets more attractively can play a key role in stimulating regional economies,” Ueyama says.

As a printing company, Toppan has played an important part in preserving cultural heritage in the form of literature and art for over a century. Helping in the transmission of culture is a key part of the company’s mission. “A commitment to culture is in our DNA. It’s something that differentiates us. It raises our corporate value and and enables us to contribute to the economy at a local level all around the world,” Ueyama concludes. 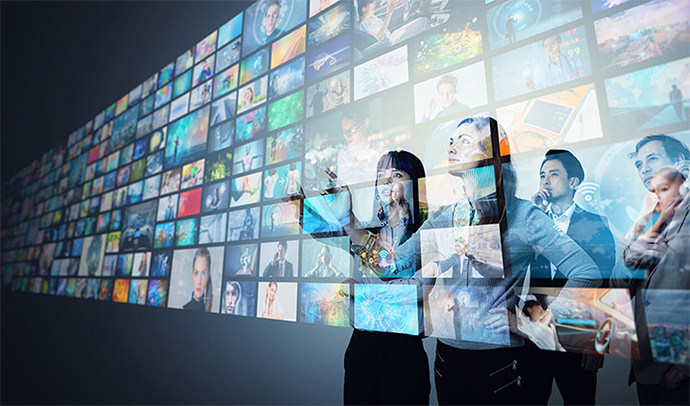