The Toppan Group positions diversity and inclusion (D&I) initiatives as an important management strategy to further advance its progress as a corporation that creates social value.

Toppan values its employees as precious “human assets” and understands how deeply it depends on them. Under the foundational concept of respect for human beings, the Group has been undertaking various measures to promote rewarding working conditions. Toppan will continue to adhere to D&I principles that harness differences among its diverse human assets as drivers of innovation. The Group will promote diversity by encouraging employees to acknowledge and respect each other’s personal qualities and values so as to better utilize and enhance their diverse abilities.

In order to cultivate a D&I mindset within the workforce, Toppan will facilitate ongoing dialogue and nurture heightened awareness and sensibilities that ensure mutual respect. The Group is consistently developing psychologically safe workplaces where every person can speak and act with dignity, free from inhibition or restraint.

We will evolve into a social value creator
that designs information and living
by developing psychologically safe workplaces
where every person’s sensibilities are nurtured,
individual differences are recognized and respected,
and diversity is harnessed to drive innovation. 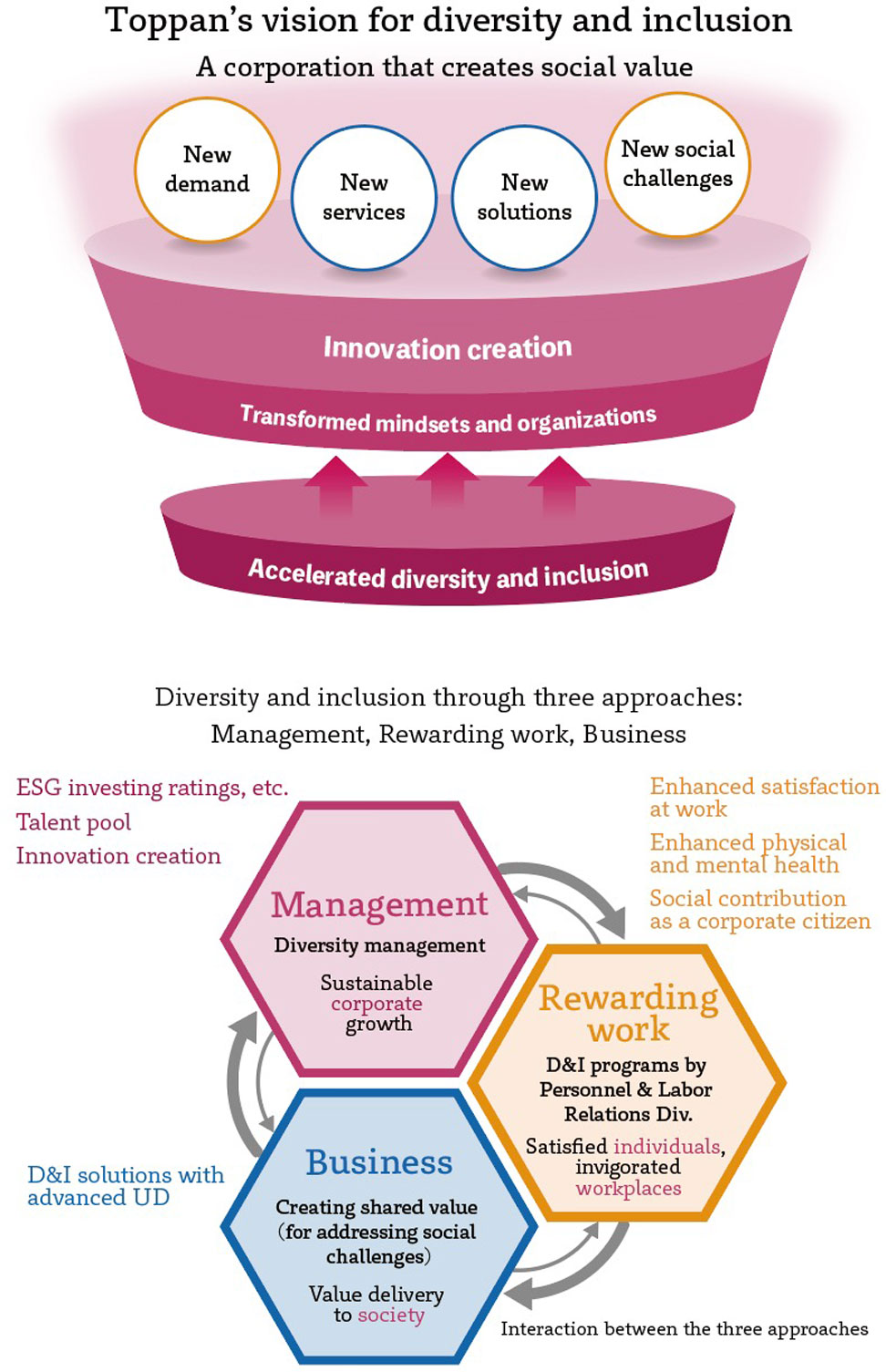 Toppan values its employees as precious “human assets” and understands how deeply it depends on them. Under the foundational concept of respect for human beings, the Company has been undertaking various measures to promote rewarding working conditions. Toppan established a Diversity & Inclusion Promotion Office in April 2019 based on a management strategy to evolve and accelerate site-based diversity initiatives into Companywide endeavors.

The Diversity & Inclusion Promotion Office is responsible for formulating the overall diversity plan and developing specific measures. The promotion office appoints personnel to take the initiative in implementing actual diversity programs attuned to the operational sites they serve. These personnel provide consultations for site members and share and address issues that have been identified with the promotion office in order to ensure heightened diversity awareness throughout the Company. 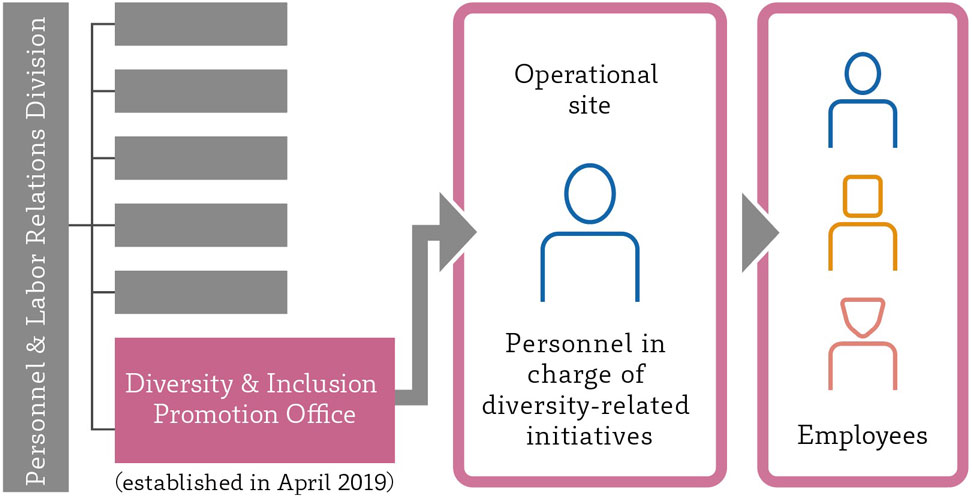 Toppan has striven to create a working environment in which employees can achieve better work-life balance. As tools to accomplish such an environment, Toppan is developing systems for childcare and nursing care leave, reduced working hours, higher family allowances for dependents, and various other benefits for employees.

To support employees with children, the period during which employees with childcare responsibilities remain eligible for reduced working hours and other preferential working schedules was extended to the end of a child’s fourth year of elementary school (surpassing the age-three requirement imposed under the applicable Japanese law), in fiscal 2016.

Toppan has also been running the “Hagukumi (nurturing) Program” since fiscal 2012. This program supports the wellbeing of employee parents by providing therapeutic activities for parents on childcare leave, activities to share the know-how necessary for maintaining good balance between working and raising children, and activities to give employees in various positions opportunities to learn about and consider the importance of work-family balance. The Hagukumi Program received the Minister of State for Gender Equality Award at the Kids Design Award 2016 in Japan.

*Held online across Japan in fiscal 2020

Information on main leave systems / measures to support work-life balance and foster the next generation, and the number of employees taking maternity or childcare leave

Toppan’s labor union and management employ systems to help employees maintain good balance between work and care at home. These systems create an environment where employees can concentrate on work without worrying about care for family members at home. After reviewing the results of employee questionnaires on nursing care, Toppan relaxed the eligibility requirements for nursing-care-related systems, designed ways to enable employees to more flexibly adjust their working hours for care, enhanced financial support during nursing care leave, and provided more information on work-care balance. Along with system enhancements in these four areas, the Company allows care-giving employees to commute to and from work by Shinkansen bullet train in certain cases. Employees have also been able to take leave for nursing care in one-hour allotments, just as they can with the child healthcare day-off, since fiscal 2019.

Toppan will continue to enrich employee support measures by providing information on good work-care balance through the intranet, holding NPO seminars on nursing care, and conducting various other activities to alleviate concerns and raise awareness on the issues faced by employees who shoulder responsibilities as care providers for their families.

Holding Seminars for Good Balance between Work and Care at Home

Toppan promotes positive action to bring out the full potential of individual employees and assign them to more diverse positions regardless of gender. Women play important roles in wider arenas and the Company strives to ensure equal treatment in promotion to managerial positions. As of April 2021, Toppan has appointed 124 female employees to managerial positions and 466 female employees to supervisory positions. With these appointments, Toppan has attained an 11.5% ratio of women among managerial and supervisory staff.

More details on the Common Employer’s Action Plan (second term; in Japanese) based on the Japanese Act on Promotion of Women's Participation and Advancement in the Workplace Data on average tenure, percentages of male/female personnel recruited, and retention rates for recruits

Toppan has implemented various initiatives to enhance awareness about lesbian, gay, bisexual, transgender, and queer or questioning (LGBTQ) persons with a view to achieving an inclusive working environment comfortable for everyone. Toppan has held Groupwide LGBTQ seminars since 2018 to further promote a sound understanding of LGBTQ-related matters and diversity and inclusion. On July 1, 2020, Toppan partially revised its systems for the treatment of matters related to employee marriages and spousal relations. Some of the systems are now been extended to same-sex partners and common-law marriage for the support of diverse employee lifestyles. Specifically, employees with same-sex and common-law partners are now granted leave for celebrations and condolence and receive allowances, wedding gifts, and other benefits.

From fiscal 2019, Toppan began inviting Kayo Fujiwara, a diversity and inclusion consultant, to lecture at open seminars on gender and sexual diversity and LGBTQ-related matters. Under COVID-19 conditions, the fiscal 2020 seminar was held online for participants across Japan on February 10, 2021.

This open seminar is one of various Toppan initiatives to promote diversity and inclusion (D&I) in the workplace with a view to realizing an inclusive working environment where diverse human assets recognize their differences and respect each other’s qualities and values. D&I initiatives have been implemented across the Group under the foundational concept of respect for, and reliance on, the individual. From the standpoints of gender and sexuality, participants at the seminar have learned about dimensions of human diversity they may have previously known little about or misunderstood, along with specific actions and measures they can take to fully appreciate human diversity.

“Sexual orientation” and “gender identity” are different things. A person’s sexuality sometimes falls outside of, or in between, the categories of “lesbian,” “gay,” “bisexual,” and “transgender.” Combinations of biological gender, psychological gender, and sexual orientation are manifold and represent a broad spectrum. After learning the basics of lesbian, gay, bisexual, transgender, and queer or questioning (LGBTQ) mindsets, participants engaged in Q&As and discussions in which they were encouraged to reflect on their own possible tendencies to take heterosexual love for granted or to assume that biological and psychological gender are aligned. They also thought back to consider any subtle discriminatory behaviors or remarks they may have made in the past.

About 380 Group employees attended the fiscal 2020 seminar via Zoom Video Webinars. Upon finishing the seminar, many participants remarked that the experience was quite informative. Some comments reflected a newfound sense of familiarity (e.g., “Gender and sexual diversity feels more familiar nowadays”; “Human diversity around me is starting to feel like second nature”), while others described a better understanding (e.g., “The seminar expanded my understanding of the true nature of diversity and inclusion”). Kicking off with this seminar, the Group has launched the TOPPAN ALLY* initiative, an activity to encourage employees to express their alliance with LGBTQ individuals. This initiative seeks to nurture workplace environments where everyone feels comfortable by initiating concerted actions based on the enhanced D&I awareness of all Group employees across Toppan.

*Allies are persons who fully understand and sympathize with a broad spectrum of gender and sexual identities and try to act with awareness of workplace diversity to make sure that everyone feels comfortable in their working environment. 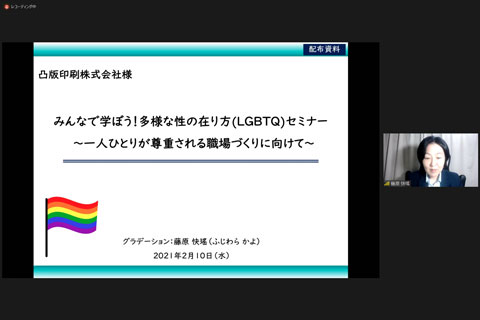 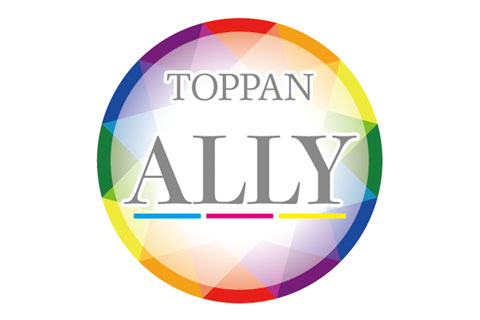